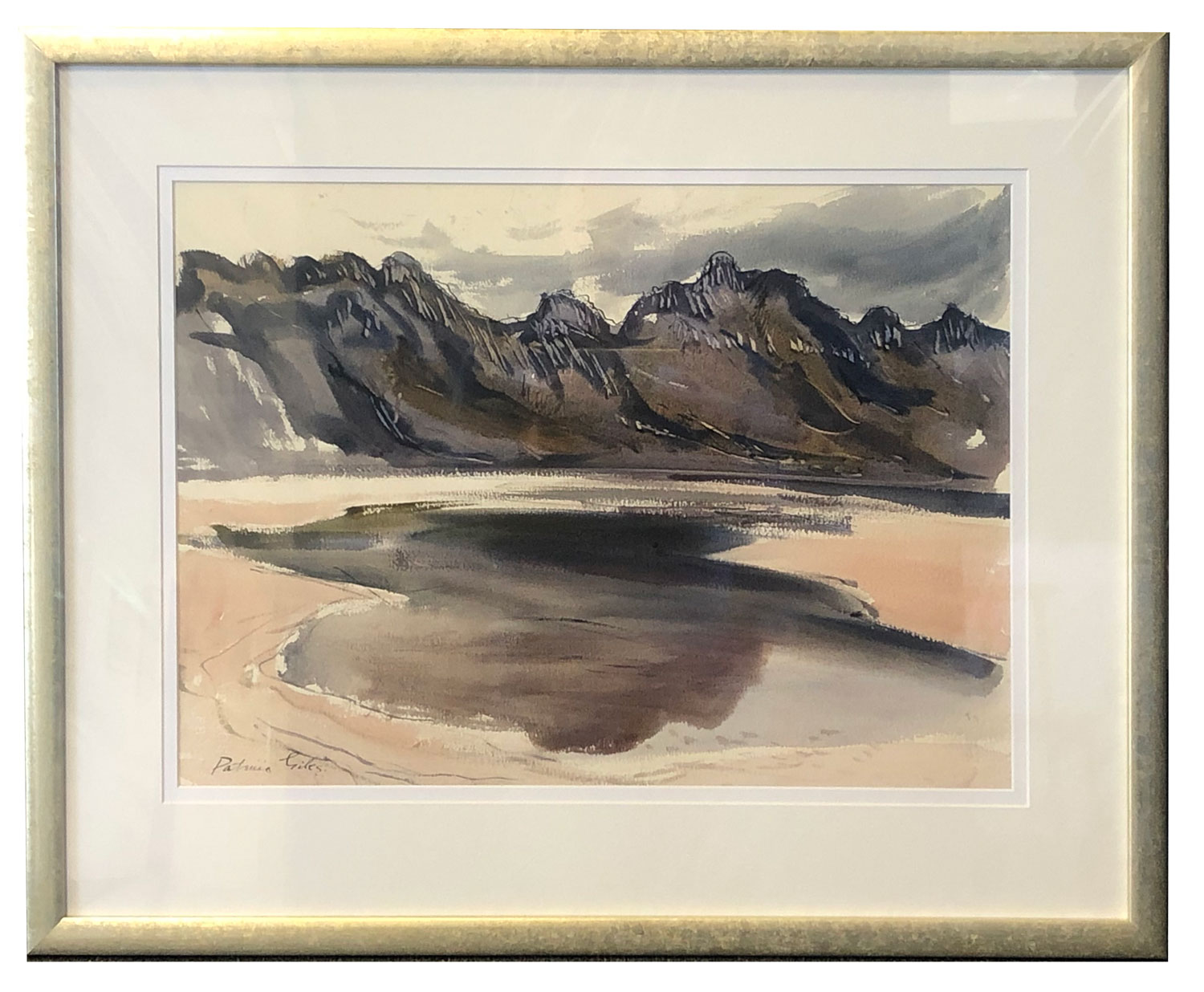 In 2019 Phillip produced an enthralling series of hauntingly captivating tintype portraits and interviews with the community whom had the good fortune to walk into the original lake. ‘Gazed Upon Lake Pedder’, was exhibited at the Salamanca Arts Centre during June 2019, a short film, Memories of a Lost Lake (watch it here) containing the interviews conducted with those whose portraits were captured also aired at the ‘Journey to Restoration Exhibition’ in October 2019.

From the foothills of kunanyi comes talented musician, composer and conservationist, Steven Crump. Steve wrote and produced the emotive classical piano piece ‘Unbroken’, inspired by the Restore Pedder Campaign the work became the soundtrack to the ‘Journey to Restoration exhibition and auction’. Steve is a tireless volunteer for numerous environmental organisations, including Restore Pedder. You can listen to ‘Unbroken’ and purchase any of Steve’s albums on his website – here.

Greg Wells & The Blackwater Band are a Hobart, Tasmania based band. Our music loves to tell you a story about inspiring people & places with social and political comment, a bit of humor and a touch of sadness, a bit like life, and the occasional sea shanty. Our band is made up of Greg Wells lead vocals and guitar, Al Campbell, Bass and Piano, Johnny Britcliffe Drums, Emily Lygin-Wolfe violin.

In 2021 Greg Wells collaborated with Rima Truchanas, daughter of Pedder campaign stalwart Olegas, to produce ‘The Lake’, a song exploring the possibility of restoring the original Lake Pedder. $1 of each sale goes to The Restore Lake Pedder Campaign which has been fighting to restore the lake ever since this iconic wilderness was flooded by the Hydro in the 1970s. The Lake Pedder National Park Was overturned to destroy this incredible wilderness and Lake.

Max Angus
Max was a regular visitor to Lake Pedder from the early 1950s. He worked strenuously to save Lake Pedder before it was inundated, using his skills as an artist and a communicator to try to persuade decision makers and the broader community of the need to preserve this unique and remarkably beautiful landscape. Read more about Max’s life and work here.

Piers Greville
In 2019, Piers Greville won the prestigious Glover prize for his contemporary work and reflection on the Lake Pedder impoundment. His piece ‘Pedder Prime Cuts’ captures the sad reality of the loss of original Pedder. Read more about the work here.

Les Southwell’s 1983 book ‘The Mountains of Paradise: the Wilderness of South-west Tasmania’ is a classic of Australian wilderness photography. His depictions of Lake Pedder National Park are now national treasures. Read more about Les Southwell’s work and life here.

Excerpt from The Mountains of Paradise: the Wilderness of South-West Tasmania, 1983.

… in January 1970 I returned for a brief visit to the lake before it was to disappear forever.

To my surprise I discovered it was a much more complex and interesting place than I had suspected on my first fleeting visit.

Next Christmas I decided to have a closer look at it, spending a week photographing there. It slowly dawned on me that there was a special quality about this place, and the more I saw, the more there was yet to be seen.

Finally there was the character of the landscape itself. For although the South-West in general is an extraordinary region – it is one of only three remaining large temperate wilderness areas in the world – there was a special quality about Lake Pedder, something beyond the normal experience which had the power to move, to inspire people.

“On the 11th of March we reached two beautiful lakes, which were named Lake Pedder and Lake Maria, lying in the heart of the most romantic scenery and being surrounded by lofty mountains.”

So wrote John Wedge in 1835, the first European to set eyes on the gleaming sands and amber waters of Lake Pedder. He realised at once he had stumbled on a work of rare natural beauty …

Lake Pedder was the centrepiece of the South-West, providing a natural basecamp for visitors with ready access to other areas including the Franklands, Mt Annne and the Arthur ranges. It was easily the largest and most spectacular natural lake in the South-West, whose shallow sandy bed covered ten square kilometres.

The lake itself was sheltered from any winds, and in still air the surface was smooth as glass. Its gentle shallows provided safe bathing for young children. The twelve kilometres or so of foreshore were of quite varied character, ranging from the beach sands to shingle banks and shoals to rocky promontory, decorated with aquatic Melaleuca and a number of strange shoreline plants.

Upstream was the lagoon system, comprising the Maria Lakes – a series of miniature ‘Lake Pedders’ complete with sandy beds and dunes, and the network of braided clearwater streams which fed Maria Creek, the source of the lake. The nearby Franklands offered, with a little easy mountaineering, everchanging views of the lake system in its many aspects, lights and weathers.

It will be appreciated that the formation of Lake Pedder was a rare chance occurrence, it being the only such glacial-outwash lake in Australia. And its special attraction was difficult to attribute to any single feature, for it formed an interwoven complex of many elements: the lake itself, the lagoon system and the Serpentine; the dark forests, the buttongrass plains and mountain streams that surrounded the lake; and the wild, magnificent setting. It had the air of a mysterious valley ringed with sombre, imposing mountains – remote, secluded and peaceful.

To stand on the beach on a clear summer’s night was an unforgettable experience. The firm white sands underfoot, the broad sweep of the beach swinging away in a wide arc towards the distant Serpentine and the Crumbledown. A ragged line of mountains circled the horizon. Overhead the great vault of the southern sky, a luminous darkness pierced with a myriad of starpoints gathered up in homely patterns.

Here the air has a purity and a transparence unknown to urban dwellers. There was a stillness of tiny sounds: the soft lap of the crystal waters, the distant cry of a night bird.

An equally dramatic occasion also comes to mind … We had slogged across the plains from Junction Creek to Lake Pedder and were just about to set foot on those pinkish-white sands which contrasted so splendidly with the greenish-yellow button grass, when the sky darkened and a purplish-black wall of rain rushed upon us. The warm air rippled as a thunderous crash occurred directly above our heads, and jagged forks of lightning streaked earthwards in a frightening display. For a moment sand-devils whirled about the beach, whipping us with their stinging particles, then the heavens opened and a veritable deluge of rain descended. Soaked to the skin we stumbled and squelched towards the camp-site, seemingly mocked and harried by all the elements of earth, fire, wind and water. A bare hour later a wan rainbow appeared over Mt. Solitary and we shivered in a chilly wind as we stood on the Pedder sandbanks, watching great shafts of yellow sunlight burst from the rolling clouds to finger the distant Frankland peaks. There are times when this universe is so humbling that no-one can remain unmoved. Only those who have seen the mood and majesty of Lake Pedder can appreciate why so many fought for its preservation with unflagging zeal.